React Native is a framework that is used for developing native Android and iOS applications. A react native app is developed such that it can only be used on a particular platform for which it is developed. These apps are better than web applications because they can use the device environment and OS features for a better user experience. Web apps, on the other hand, are easier and faster and therefore, are preferred by React native developers.

React Native framework is based on a technology that can be used in both the web and native apps. The framework is majorly used for developing cross-platform native mobile apps.

There is also available a customized version that can be used to develop desktop apps for Windows and Mac. Within a few years of its launch, React Native became one of the most popular native app development platforms.

If you are planning to work with the firm, know benefits of hiring dedicated developers team and things to consider before working with an IT company that actually works.

Among many benefits, the most important advantage of the use of this framework is that you can develop two native mobile apps (for Android and iOS) for the price and time of one.

It makes use of a standard set of tools for both mobile and web development. The coding mechanism for iOS and Android is almost identical in this framework. It is the best platform for developing React mobile UI.

Since React Native has access to devices’ cameras, geolocation, and contact, it is perfectly suitable for developing social networks and communications apps.

Facebook, Instagram, and Skype are the best examples of mobile apps developed by using the React Native framework. It can also be used to develop eCommerce applications.

React Native, which was originally released in March 2015 as a variant of the React framework, makes it easy to develop native mobile applications using the same React library which is used for web application development.

The framework allows React native developers to build the UI for native apps. It can also make use of the React component-based architecture, which makes it possible for different developers to work on different modules of the same project without having to worry about interrupting or overlapping with each other work.

Now that React Native is available for iOS, Android and Windows platforms as well, it is a truly cross-platform development framework that facilitates the development of native apps for different operating systems.

How to Develop an Affordable Native App?

React Native follows the learn once, write anywhereâ€ approach, which empowers its developers to build applications for any platform easily using the same adaptable technique. The framework is suitable for creating mobile applications for all business niches.

Cost, time and quality are three of the most important factors to be considered while deciding upon a native app development technique. 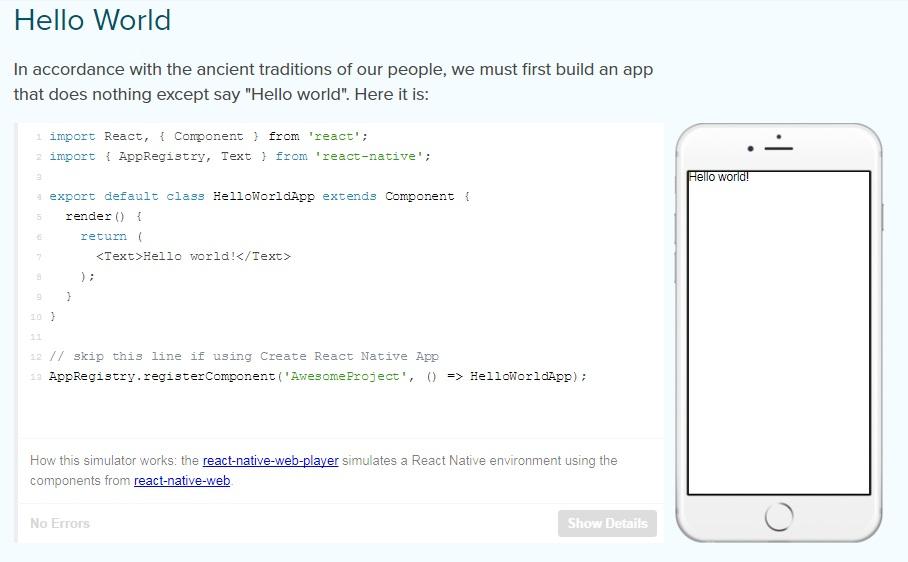 Here is the full tutorial to start with basic – https://facebook.github.io/react-native/docs/getting-started.html

If you are a developer, you already understand the benefits of using React Native for native app development. If you are a business person looking for an affordable yet quality solution for native mobile apps, you can find some helpful ideas here.

Also, know Freelancers vs Web Development Company Before hiring a freelancer to consider all the consequences that can happen.

One way to get an affordable app is to develop a smaller app. But this may affect your business negatively, especially if you are providing services at the global level. You cannot hire a reputed development company as your budget is low, and hiring a relatively new company is usually a risky business.

Well, there are some good startups and small react native app development firms that are eager to offer quality services at affordable rates as they are focused on building their brand reputation rather than earning much. If you can get them more business, they might offer you more discounts on their app development services.

There are still some challenges with this process, such as finding a reliable development company or developer, a time-consuming process due to the time difference, distant communication, etc. The cost of app development through React Native is much more affordable with the help of outsourcing.

Thanks to the presence of so many freelance websites and platforms, you can now easily manage to find an expert native mobile app developer within your budget. These companies will let you choose your favourite freelance developer based on your specific requirements, and you can decide the payment that suits your budget.

Developers from offshore and/or outsourcing companies are much more affordable than your regular mobile app developers. You can compare the pay rates of developers in different countries to find out the most affordable option and hire accordingly.

But if you are planning to hire an offshore company for your development work, make sure to list all your concerns and doubts before signing an agreement with the company.