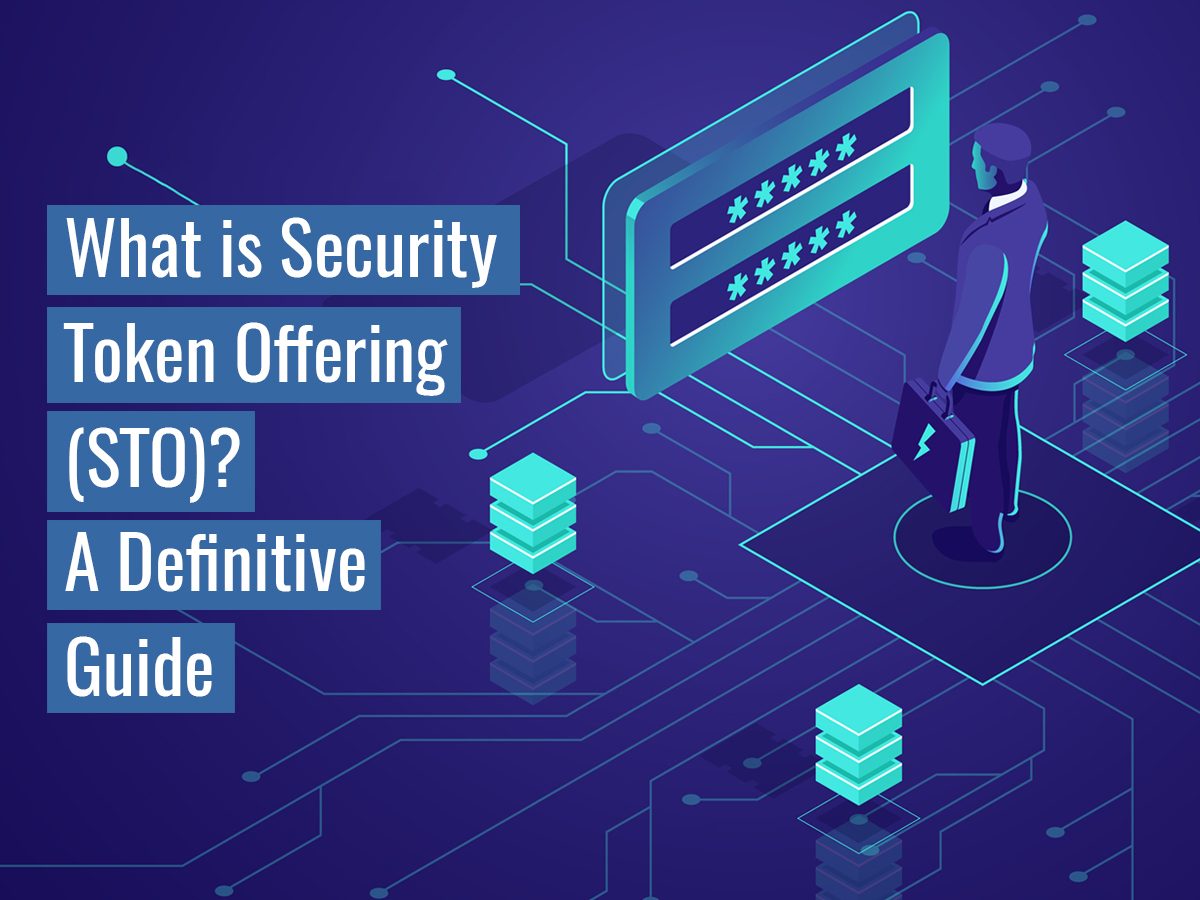 In this article, you’ll learn what a security token offering (STO) is and how are they different (or better) from initial coin offerings (ICO) and traditional investment mechanisms.

We will also discuss the potential future of STOs and what experts have to say about them. As security tokens are rising in popularity, more and more potential investors and businesses are searching for information about STOs. This blog aims to help them with correct and updated information.

Security token offering, or STO, refers to a new kind of fundraising method which has recently emerged in popularity, owing to the failure or drawbacks of the existing fundraising mechanisms.

Gone are the days when startups had limited ways to raise funding for their projects. In recent years, many new fundraising mechanisms have emerged which have become popular because of their transparency and healthy use of technology means. ICO, or Initial Coin Offering, is one such fundraising method being employed by thousands of startups for fundraising purposes, especially in the cryptocurrency space.

What are ICOs and why did they become less effective?

Well, ICOs were not always a failure. In fact, they managed to help companies raise over $22 billion in no time. Yes, that’s true. There was a time when ICOs were so popular that almost every investor was eager to become a part of them. But not anymore.

Initial Coin Offerings (ICO) is primarily used by companies which deal in blockchain-related projects and can provide their investors with a digital value, in the form of a token, in exchange for their money. Tokens are built on blockchain technology, which is a distributed, public ledger of digital records. Most of the companies dealing in ICOs were selling utility tokens in exchange for investor funding. These utility tokens were supposed to give investors access to the particular platform or product that the said company was building.

However, soon the focus of ICO investors shifted from utilizing the tokens for access to using them as a means of investment. Due to the high liquidity of tokens, many new trading markets developed which started allowing token holders to sell their tokens for higher prices according to the market shift.

But eventually, ICOs became ineffective because of the increasing fraud in this space. Many new companies and startups started seeing ICO as an easy way to invite quick investments, which it was.

However, most of these companies failed to develop the product or platform for which they had collected investors’ money. The lack of proper regulation resulted in investors losing their money invested with ICOs. This is what gave birth to the security token offering, also called STO.

What are STOs and how are they better?

What is an STO? Security Token Offering (STO) is the latest form of fundraising being used by startups in the digital space. One of the primary benefits of STO market investments is that investors get security tokens instead of utility tokens. In order to understand the benefits of STO, one should know what a security token is.

What is a security token?

Security tokens are simply a digital representation of a tradable, valuable asset. These behave similarly to traditional securities which hold real value. This is why security tokens must be regulated under federal securities regulations. One of the prerequisites to be a security token is to pass the Howey Test.

The tokenization of securities (stocks, bonds, etc.) in the form of security tokens can give them more transparency and liquidity. Since security tokens are regulated and have real value, they are immensely beneficial for investors and have many realistic use cases.

All Security Tokens are subject to basic security regulations, according to which the investors, as well as security token providers, must be properly accredited.

Security Token Offering (STO) is essentially a fundraising mechanism in which the holding company sells security tokens in exchange for investors’ money. The major benefit of this type of investment is that they are recognized by law, therefore, the investors can be assured of an ROI.

In the past couple of years, many successful STOs have been organized by both new startups and established companies. According to ICO rating, more than $700MM were raised by different STOs by February 2019. This is the data related only to compliance STO. The interest in the STO space has rapidly increased over the past year or so.

Blockchain Technology Guide – What is it and How Does it Work?

More than half of the new companies in the blockchain industry are choosing STO over ICO for funding purposes. Here’s why.

STOs are better in terms of features and security against both traditional security offerings and ICOs. Here are some of the advantages of STOs over other funding mechanisms:

As security tokens (or any other cryptocurrency for that matter) are developed on blockchain tech, the transactions involving these currencies are public and transparent. The benefit is that such transactions are easy to verify in case of a dispute.

Traditional investments, including securities, have a lengthy transaction procedure since each transaction goes through middlemen, such as banks or stock authorities, before execution, which only increases the overall time of transaction processing. Security tokens, on the other hand, have faster execution and lower processing time because of the lack of middlemen.

One of the primary reasons why ICOs have started losing their grip over investors is the lack of accountability because, unlike security tokens, utility tokens need not be regulated. This is why fraudulent activities and projects have increased a lot in this space. And this is why, investors are moving towards STO, which is a more secure investment product.

One of the major benefits of security tokens is that they can be traded at any time and from anywhere. Since cryptocurrency trading is a global activity which is performed online, the token holders can engage in security token trading at their own pace and convenience.

Since security tokens are regulated, only licensed token trading platforms are allowed to accept trades on security tokens. This makes it easier for holders to liquidate their tokens and get good value at the time. Security tokens are known to be able to turn even traditionally illiquid markets liquid.

Unlike traditional investment mechanisms which are limited to specific reasons, STO investments are global, allowing organizers to market their products/deals on a global platform and investors to invest in new projects globally, which results in increased exposure and valuation of underlying assets.

The presence of middlemen in traditional finance & investments increases the cost of trading, decreasing the profitability of investors. Security token offerings do not involve any middleman, so there is no transaction fee and lesser complexity.

Similar to many other cryptocurrencies, security tokens utilize the smart contract facility of blockchain to automate transactions and various other functions through programming. This will not only improve security but also reduce the code of transactions as no lawyer service is needed.

Since there are no middlemen in transactions involving security tokens, the probability of manual or human intervention, and therefore fraud, is virtually nil. This way, STOs minimize financial institutions’ interference in the investment process, increasing profitability and security for the end users.

Digital assets such as cryptocurrencies are very easy to customize, as they can be coded for nearly any type of functionality. As far as STOs are concerned, security tokens can be customized for KYC, transaction limits, dividends, and more.

What the future holds for security token offerings

Experts believe that the flexible nature of security tokens will enable companies to implement liquidity in their businesses by making their valuable components more liquid and tradable, which will, in turn, create new investment opportunities.

Different startups have different reasons to pursue a Security Token Offering (STO). For instance, UCC (United Cancer Centers) project is implementing an STO because they needed a way to fractionate distribution-based investment contracts so as to offer their investors a revenue-sharing model. This has been made possible by security tokens which make these smart contracts liquidable on STO exchanges.

Other startups and organizations are simply leveraging the blockchain feature of Security Token Offerings to expand their fundraising capabilities beyond a specific region to global investors, while at the same time offering revenue-sharing models to their investors and token holders.

Security tokens which are regulated and far more secure as compared to utility tokens and fiat currencies are now becoming an obvious choice of investors and companies looking for tokenization of their assets. Overall, it is fair to say that both investors’ and companies’ interest in STO is growing and will continue to grow in the coming future, as security tokens are more liquid than any other cryptocurrency variant while being less risky. The future seems only bright for their digital tokens.

Looking to start your own Security Token Offering? Hire professional STO development services with SAG IPL. Our veteran blockchain developers can help you tokenize any of your company assets.