Blockchain is one of the fastest-growing internet technologies today. So, naturally, everyone wants to build their next project or business on the blockchain and want to know the Cost to Build a Blockchain Project.

But, it’s easier said than done.

Cost to Build a Blockchain Project from scratch, you’ll not only need to have good experience in and knowledge of the blockchain industry, but also you’ll need to arrange for things like the developers’ team, marketers, a project plan, market research, audit, and among others.

Is Blockchain The Right Choice for Your Business?

Blockchain technology concept with diagram of chain and encrypted blocks.

Blockchain is growing at a rapid pace and has already become one of the most popular technologies of modern times.

According to a study, the global blockchain market will reach USD 39.7 billion by 2025. That means the best is yet to come.

Since the blockchain is still in its early stage, you stand to get the beginner advantages, in terms of low competition and cost.

Blockchain has brought the possibility of creating a trustless, middleman-free and transparent financial system, which itself is no less than a revolution.

Not only is blockchain the perfect technology for your next project, also this is the best time to start developing in the blockchain.

Cost estimation is a critical part of any project, even more so in case you’re building your project on blockchain.

Unless you have a good idea of how much your project is going to cost, how can you expect to get the funding approved for the same?

Also, how will you bring investors to spend their money on your project when you don’t even know how much it will cost in the first place.

This is even more crucial for blockchain projects because determining the return on investment is more complex in the case of blockchain app development.

Things you can build on a blockchain

If you are just starting out in the blockchain development space, you must first figure out exactly what you want to build on blockchain.

Now, there are a number of things you can build on blockchain, such as:

Most of the blockchain projects come under the DApp category, where you build a distributed, decentralized application with the ability for P2P transactions.

In other cases, when someone is looking to build a blockchain solution for their enterprise with a focus on privacy, security and scalability, it is recommended to go with an enterprise blockchain.

The cost of Blockchain Development Services will naturally depend on the type of blockchain and product you are going to build.

Factors that affect the cost of a public blockchain project

If you are planning to build a decentralized product on a public blockchain like Ethereum, you are essentially building a DApp.

Since you are using an existing blockchain network, you’ll not be required to build an entirely new infrastructure from scratch, which means the cost of development will be significantly lower compared to the cost of enterprise blockchain development.

Another benefit of developing your product on a public blockchain is that most of the tools you’ll need for development are open-source and therefore, free.

Once your DApp is developed, you’ll need to deploy it on the public blockchain and will need to have the native cryptocurrency such as ETH for the same.

The good thing is that most ETH web wallets are free to use.

In addition, you may need to invest in a hardware wallet to keep your cryptocurrencies safe. The one-time cost will depend on the wallet type.

Now, the most significant cost, as always, is the cost of developers, which we will discuss later in this article.

Cost factors of developing on a permissioned blockchain

An enterprise looking to build a proprietary blockchain solution to increase efficiency won’t generally use a public blockchain because of issues like privacy and scalability.

In that case, developing on a private, permissioned blockchain is usually the best option.

When building a project on a private blockchain, you need to build/buy everything separately, including the blockchain infrastructure, network, storage, speed, encryption, front-end, and smart contracts.

And each product has a separate cost, which makes private blockchain development a much costlier deal than building a project on a public blockchain.

While you can purchase the infrastructure, speed and storage from a third-party provider like AWS or IBM Cloud IaaS, you’ll still need to develop a P2P network and use encryption to protect the network.

For this, you’ll have to hire networking engineers with a specialization in P2P networks and encryption experts.

Besides that, you’ll need to build the front-end of your blockchain project and will have to hire front-end blockchain developers for that.

The next step is to build the consensus algorithm for your blockchain. You can choose from Proof of Work (PoW) or Proof of Stake (PoS) consensus, depending on your needs and budget.

The overall cost can be calculated by combining the cost/fee of individual developers, engineers and specialists. Make sure to also consider the cost of the Project Manager. 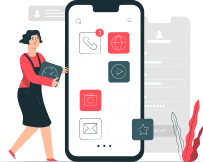 Are you still in confusion? We can help you in finding the best smart contract development cost and assist you in the complete project.

Alternatively, you can build your enterprise blockchain project on Hyperledger Fabric, which is a low-cost yet equally powerful blockchain development platform.

Hyperledger Fabric is a distributed ledger software that can be used for building DApps and decentralized networks for enterprises.

It comprises plug-and-play components that can be used by enterprise blockchain developers for creating blockchain-based products and solutions in a fast & low-cost manner.

The benefit of using the Hyperledger Fabric for building your blockchain project is that you get a readymade blockchain platform along with all the tools & features such as encryption, file sharing, P2P network, and consensus algorithm.

Many top companies, including IBM and AWS, provide readymade blockchain platforms based on Hyperledger Fabric, allowing developers to rapidly build their applications at a low cost.

Related: A Complete Guide to Hyperledger Blockchain – What It Is, How It Works

Cost To Hire A Blockchain developer

Naturally, the Cost to Build a Blockchain Project will largely depend on the cost of the developer.

So, the question you should ask yourself is: how much does it cost to hire a blockchain developer?

According to some top freelancing platforms, including Upwork, blockchain was one of the fastest-growing tech skills of the decade (2011-2020).

The cost of a blockchain developer will also depend on factors like:

Talking about the salaries of blockchain developers, it starts at $50k and goes up to $175k per year, depending on the experience, expertise and location of the developer.

Freelance blockchain developers usually charge in the range of $100-$150 per hour.

In India, however, you can hire top blockchain companies like SAG IPL at a much lower rate, starting from $20 per hour for an expert blockchain developer. Like I said, the developer cost can vary with the location.

So far, we have already covered the costs of developers for building projects on both public and private blockchains.

Another cost that you should consider when planning your blockchain development project is the cost of testing. In blockchain terms, it’s called code audit.

There is a big difference between normal software development and blockchain development. Blockchain smart contracts cannot be changed or modified once you deploy them, so, you need to be 100% sure that your code is correct and bug-free before you can launch it.

That is why you need to thoroughly test as well as audit the code.

There are dedicated professionals, called blockchain code auditors, mostly blockchain developers with huge experience, who can review your code and identify bugs.

They will review the project documentation and the entire code, analyze the code, identify vulnerabilities & bugs, analyze the overall functionality, and report any flaws.

Depending on who you ask, it can be costly to hire such a professional for your blockchain code audit.

The best option is to hire a blockchain development company that also provides the code auditing service.

ICO (Initial Coin Offering) is the most preferred way of raising funds for a blockchain project.

It involves creating and selling your cryptocurrency/token in exchange for investors’ money.

ICO, however, is an old and outdated concept, which became infamous because of the rising fraudulent activities.

The key to a successful ICO/ITO/STO/IEO campaign is quality development plus brilliant marketing.

ICO development might involve the development of the campaign website, token or coin development (if not already covered in blockchain development), whitepaper creation & documentation, wallet development, etc., depending on your project needs.

Depending on the features you want in your ICO website and the ICO development company, the cost of developing an ICO campaign could go up to $5K-$10.

At SAG IPL, however, our ICO development package pricing starts at just $999. The price goes up as more advanced features & options are included.

We are here to help you in every possible to get your project completed and to promote your project to audiences across the globe.

We at reachable now!

Once the blockchain is developed, or when you are looking to raise funds for your project through an ICO or ITO, you’ll also need to focus on marketing.

The marketing of a blockchain (ICO/ITO/STO) project involves a number of things such as listing on ICO platforms, Airdrop/Bounty campaign,

If you are also planning to promote your blockchain project in order to raise funds or extend the reach, you’ll obviously need to hire a dedicated blockchain marketing team.

Depending on the services you want to include and the number of experts you wish to hire, the cost may range from a few hundred dollars to several thousand.

When you choose to hire blockchain/ICO marketing services from SAG IPL, here’s what you get:

A successful blockchain or ICO marketing campaign is a combination of all the above techniques. Of course, finding a blockchain marketing company that provides all the services will not be easy.

Thankfully, we have the experience and resources to provide everything you need related to blockchain marketing in one place.

As for the cost, our Basic ICO Marketing package starts at $500 per month, which covers listing on top ICO portals, basic email campaign, content marketing, etc.

Come and join us for a quick quotation on your complete development project cost and marketing. We are ready to jump start with your project

Developing a blockchain project is no longer difficult, given that you have access to the best resources and team.

The difficult part is, however, to find the right blockchain development & marketing team that can fit your budget.

Now that you have a good idea of the factors that contribute to the Cost to Build a Blockchain Project, such as developer cost, infrastructure & hosting costs, code audit cost, etc. and the funds you’ll need to develop your own blockchain project from scratch, you can start right away.

If you are looking to raise funds for your blockchain project, ICO is the best way to start with. Here is a guide to creating and launching a successful ICO campaign.

If you want to discuss your blockchain development project with an expert or need to hire cost-friendly blockchain developers from SAG IPL, give us a call on 0141-4072000 or drop an email to [email protected].