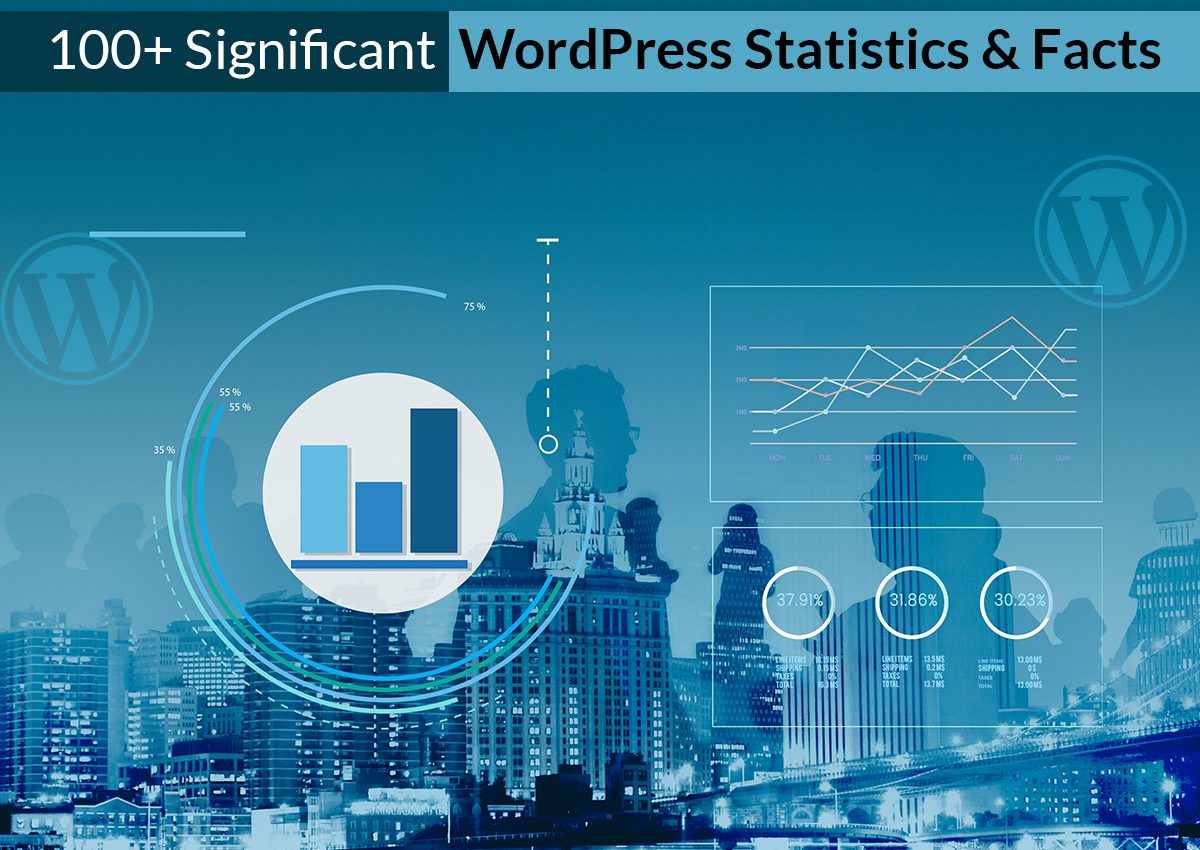 WordPress Development Services is an open-source content management system (CMS) which was first released in May 2003. It happens to be one of the oldest website platforms out there and also the most popular one.

WordPress is the only CMS that first perfectly to all kinds of web development requirements. Whether you need to build a simple website or a business blog or a fully-fledged online shopping store, WordPress is right for the job.

Without further ado, we will now take a look at some interesting WordPress statistics & facts that show just how powerful this content management system actually is.

Almost two years before now, WordPress had become officially the most favored CMS and now it is stretching the gap from its competitors.

Yes, you heard it right. WordPress is now officially the most favoured content management system out there.

4. Over 60 million websites are hosted on the Custom WordPress Development Services platform.

8. As per statistics of Jan-2021, 661 new WordPress sites start their journey daily.

9. WordPress, with 144 million monthly visits, is fifth on the list of the most visited websites in the US.

10. Some of the popular WordPress plugins such as WooCommerce get as many as a million installations per week.

14. WordPress is used by businesses in over 70+ languages, with English being the most popular language for WordPress users.

16. WordPress sites around the globe on average receive 17 new posts every second.

17. Over 4.7% of all WordPress-hosted blogs are in Spanish, the second most popular language for WordPress users.

How Much to Charge For A WordPress Website in 2023

18. Over 13% of all WordPress websites use the WooCommerce plugin. The plugin has been downloaded over 60 million times and installed by 3 million websites worldwide.

19. Over 70.5 million new posts are written on WordPress websites every month.

21. “WordPress” is searched more than 37 million times by global users every month, including long-tail keywords.

22. More than 25% of newly registered domains are run with WordPress.

23. With over 75 million active users, WordPress is the most-used content management system in the world.

28. WordPress v4.9, which was launched in November 2017, is reportedly the most downloaded software in the world, with over 160 million downloads.

30. WordPress plugins have been downloaded over 1.5 billion times already.

31. With only 800+ employees worldwide, WordPress is smaller than most of the popular tech companies in size yet more powerful than many of them.

32. On average, WordPress gets a new major version every 152 days.

33. So far, 317 different versions of WordPress have been announced.

36. Akismet, one of the most popular WordPress plugins, has reportedly caught 500 billion spam comments to date.

37. Wednesday happens to be a lucky day for WordPress, as the CMS is said to receive most of its downloads on this day of the week.

38. Over 400 million people visit WordPress sites each month. As per previous statistics, there were 309 million people who visit nearly 21 billion pages every month.

39. WordPress gets a minimum of 1.2 million new domain registrations every 6 months.

40. Yoast SEO, which is a popular plugin for WordPress, boasts 130,801,289 downloads so far, followed by Akismet, which has been downloaded 117 million times.

42. WordPress has been the most popular CMS for the last 9 consecutive years.

An Easy-Breezy Tutorial To Convert PSD To WordPress Themes

43. Automattic, the company behind WordPress, has an estimated annual revenue of $155 million in 2022.

47. 93% of the most selling themes on ThemeForest are mobile responsive.

48. 600+ new websites are built on the WordPress platform every day.

49. WordPress v4.9, which is arguably the most successful WordPress version of all time, was developed by 443 people, of which 185 were freshers having no previous experience in WordPress development.

50. WooCommerce, one of the most popular plugins for e-commerce development, has been downloaded over 50 million times and powers 28% of e-commerce sites.

52. More than 25% of WordPress users (bloggers, businessmen, entrepreneurs, etc.) make a full-time income from the platform.

53. WordPress is free to use. Hosting a professional WordPress website, along with a domain name, will cost you not more than $70 a year.

55. WordPress websites with outdated versions are more likely to get hacked. Of all the WordPress sites that were hacked in 2017, over 39% were outdated.

56. Being popular has its own drawbacks. Of all the websites that are hacked, over 70% are based on WordPress.

57. The average annual salary of a WordPress developer ranges from $44,000 to $87,000, depending on the experience of the developer.

58. WordPress also holds the record for most files uploaded in a single month. In December 2018, over 70 million files were uploaded by different WordPress website owners.

60. WordCamps are the unofficial conferences organized by the WordPress community to discuss everything related to the CMS.

61. WordCamps are held all over the world. In 2018, nearly 139 WordCamps were organized in different parts of the globe.

62. Freelance WordPress developers usually earn in the range of $10 to $300 per hour.

64. WordPress has been built with PHP and MySQL databases. It took over 70+ developers to build the WordPress core.

65. Employees at WordPress get an average salary of $66,775, according to data by SimplyHired.

66. $1,000 is the average cost paid by people for a fully-functioning WordPress website.

68. WordPress (a fully-hosted platform) has blogs in more than 120 languages, of which 71% are in English.

69. “Kubrick” and “WordPress Classic” are two of the oldest and most popular WordPress themes.

70. WordPress is one of the easiest-to-use platforms. It roughly takes 5 minutes to install.

71. There are over 2 million topics on the official WordPress support forum.

72. WordPress was launched in 2005 as a free blogging platform on the WordPress.org software. It continues to offer free hosting to websites and blogs worldwide.

73. The average price of a premium WordPress theme is $59.

74. WordPress supports almost every web host out there, which means you can install and use WordPress software with any hosting provider.

How To Hide The Fact That Your Website Runs On WordPress

75. WordPress is platform-independent. In addition to offering most of its themes in the responsive format, it also has native apps for almost all major platforms, including iOS and Android.

76. Each of the top 30 plugins in the WordPress official directory has been installed more than 1 million times.

77. Jetpack WordPress plugin has been downloaded 93 million times and counting.

78. WordPress is preferred even by Google. The website ranks higher than most of its competitors for all related search engine queries.

80. WordPress is preferred and recommended by over 50% of CMS users and web designers.

81. WordPress has been translated into 180 different languages so far, including many local languages.

83. Out of all WordPress offerings, plugins are the most prone to vulnerabilities such as hacking, especially outdated plugins.

84. Gravity Forms, Timthumbs and Revslider are the top 3 most hacked WordPress plugins.

85. WordPress is open-source and freely available for download and use for any personal/professional purpose.

Some more Interesting Facts and Statistics about WordPress

87. In 2017, Automattic had to shut down its San Francisco office because most of its 550 employees were working remotely.

88. With WordPress, you have multiple options to make money even if you don’t want to work with clients. These include blogging, theme and plugin development & sale, advertising, etc.

20 Questions to ask a WordPress Developer Before Hiring

89. The name WordPress was reportedly suggested by Christine Selleck Tremoulet, a friend of Matt Mullenweg (co-founder of WordPress).

90. Wappu, the official mascot of WordPress, was created by Japanese community members.

91. WordPress is owned by Automatic and managed by the WordPress Foundation, a non-profit organization.

92. WordPress was used by a popular TV show to create a mockup of a missile guidance system.

93. WordPress doesn’t have a CEO. Matt Mullenweg is the CEO of Automattic, the company behind WordPress.

94. Despite it being completely free to update WordPress, most of the site owners (over 60%) still run an older version.

96. The new Gutenberg editor introduced with WordPress version 5.0 has been named after Johannes Gutenberg, the inventor of the printing press in the 15th century.

98. The official watermark logo of WordPress was introduced in 2005, two years after the launch of the CMS.

99. WordPress is used by government websites as well as the websites of many reputed colleges & universities all around the world.

100. Matt Mullenweg, the founder of WordPress, was only 19 years old when he launched the CMS.

101. 20% of the WordPress core code is written in JavaScript.

102. Gutenberg, the new editor which replaced the classic editor is named after Johannes Gutenberg, the inventor of a printing press with movable type more than 500 years ago.

103. As per statistics of Jan-2021, 281 new WooCommerce-powered online shops start on average each day.

105. From WordPress version 5.8 onwards, you can upload and use WebP images in WordPress just as you would a JPEG or PNG image today

From all the things you have read so far in this article, one thing is clear – WordPress is the best of all the content management systems out there.

We now only hope that the newer versions of WordPress are even better than our expectations and do something to resolve those serious vulnerabilities troubling the platform users.